Phillip served as a soldier of the Townsville-based First Battalion, Royal Australian Regiment, with the core values of protecting the Australian way of life, freedom of speech, family and reward for effort - all characteristics which Phillip proudly carries in his day-to-day life.

Phillip served in East Timor and Afghanistan, and was deployed to Afghanistan in 2009 where he was wounded in action when an Improvised Explosive Device detonated within one metre of him. The blast resulted in Phillip sustaining severe injuries and he was medically evacuated back to Australia. As well as obvious physical injuries from the blast, Phillip also suffered from traumatic brain injury and several other life changing conditions.

Phillip spent the next several years putting all of his efforts into recovery and coming out the other side stronger than ever before. Today, he is passionate about helping others overcome adversity to become the best versions of themselves.

Since leaving the Defence Force, Phillip has worked in mental well-being and suicide prevention organisations. In 2018 he was named the Queensland Young Australian of the Year, for his work in mental illness and suicide prevention. He was then awarded the Medal of the Order of Australia (OAM) for significant service to the welfare of war veterans in 2018.

Other roles Phillip has held include:

Phillip entered politics because he hadn’t seen a fighter in the local MP’s role for too long. Passionate about his home town, and wanting Townsville to be a great place to raise his family, he decided to run for office. Phillip wants to see the Herbert electorate prosper again, to be a region where there is opportunity and reward for effort, and a city in which we can have great confidence in the future. 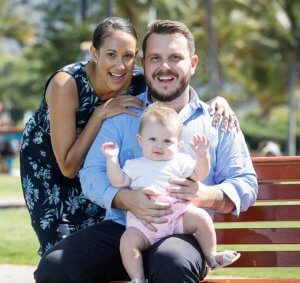 Water security, affordable electricity and job creation are critical pieces of the economic puzzle and must be treated as such. Small and medium businesses are the engine room of the local economy, and Phillip wants Townsville businesses to have confidence to take risk, be rewarded and drive our local economy for years to come.

Phillip is married to Jenna, who gave birth to their first child, a beautiful daughter named Astin, in April 2018, and a younger sister Emery in April 2020.

Your opinion matters. Take part in our latest community survey.

Be part of something great. Get involved by joining Phillip's team.

Show your support and make a real difference in the future of Herbert.
Menu